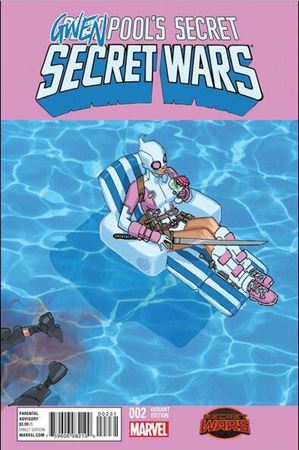 Gwenpool (Gwendolyn "Gwen" Poole) is a fictional character appearing in American comic books published by Marvel Comics. Her physical design originated as an amalgam of Gwen Stacy and Wade Wilson on a variant cover of Deadpool's Secret Secret Wars #2, which was one of twenty variant covers published due to the popularity of Spider-Gwen from June 2015.

Marvel initially produced two stories featuring Gwenpool as a character, a backup story in the series Howard the Duck, and a one-shot Gwenpool Holiday Special. Following the publication of the one-shot, an ongoing series titled The Unbelievable Gwenpool by the same creative team was announced, which started in April 2016 and concluded in April 2018. The Unbelievable Gwenpool #0, collecting Poole's appearances from Howard the Duck and the first Gwenpool Holiday Special, was later released.