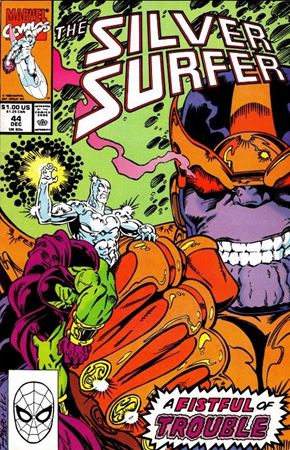 The Infinity Gauntlet is an American comic book storyline published by Marvel Comics. In addition to an eponymous, six-issue limited series written by Jim Starlin and pencilled by George Pérez and Ron Lim, cross over chapters appeared in related comic books. Since its initial serialization from July to December 1991, the series has been reprinted in various formats and editions.

The series' events are driven by Thanos, a nihilist character created for Marvel by Starlin in 1973. When Starlin began writing Silver Surfer in 1990, he and Lim began a new plot with Thanos that developed over sixteen monthly issues and a spin-off limited series before concluding in The Infinity Gauntlet. Pérez was brought in to draw The Infinity Gauntlet because he had more name recognition among fans and because Lim already had a full schedule. However, after completing three issues and part of the fourth, his own busy schedule and dissatisfaction with the story led to him being replaced by Lim.

At the start of The Infinity Gauntlet, the character Thanos has collected all six Infinity Gems and attached them to his gauntlet. With their combined power, he becomes "like a god" and sets out to win the affection of Mistress Death, the living embodiment of death in the Marvel Universe. When Thanos uses his powers to instantly kill half of the living beings in the universe, Adam Warlock leads Earth's remaining heroes against him. After the Infinity Gauntlet is stolen by Thanos' villainous granddaughter Nebula, Thanos aids the remaining heroes in defeating her. Warlock ultimately obtains the Infinity Gauntlet and uses its power to undo the death and destruction.

The series was a top seller for Marvel during publication and was followed by two immediate sequels, The Infinity War (1992) and The Infinity Crusade (1993). The story's events continued to be referenced in other Marvel comics for decades. The Infinity Gauntlet remained popular among fans, warranting multiple reprint editions and merchandise, with its themes and plot elements adapted into video games, animated cartoons, and film.