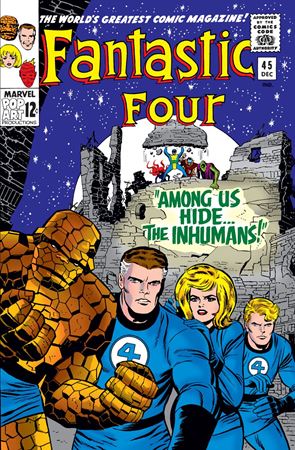 The Inhumans are a fictional group of superheroes appearing in American comic books published by Marvel Comics. The comic book series has usually focused more specifically on the adventures of the Inhuman Royal Family, and many people associate the name "Inhumans" with this particular team of super-powered characters.

The Inhumans first appeared in Fantastic Four #45 (December 1965), though members Medusa and Gorgon appeared in earlier issues of that series (#36 and #44, respectively). Their home, the city of Attilan, was first mentioned years earlier, in a Tuk the Caveboy story written and drawn by Jack Kirby that appeared in Captain America Comics #1 (March 1941). The city was described as the home of a race that was evolutionarily advanced when human beings were still in the Stone Age.

The Inhuman Royal Family have been adapted to numerous Marvel animated series and video games over the years. Inhuman characters were introduced in live-action in the second season of Agents of S.H.I.E.L.D., while the Inhuman Royal Family are featured in the TV series Inhumans, which premiered in 2017. The latter show was critically panned and lasted only one season. Earlier, a proposed film adaptation of the Inhumans was announced in 2014 by Marvel Studios, but was later removed from their slate.