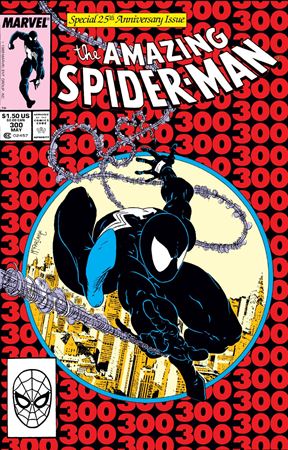 Venom is a fictional character appearing in American comic books published by Marvel Comics, commonly in association with Spider-Man. The character is a sentient alien symbiote with an amorphous, liquid-like form, who survives by bonding with a host, usually human. This dual-life form receives enhanced powers and usually refers to itself as "Venom". The symbiote was originally introduced as a living alien costume in The Amazing Spider-Man #252 (May 1984), with a full first appearance as Venom in The Amazing Spider-Man #300 (May 1988).

The Venom symbiote's first human host was Spider-Man, who eventually discovered its true nefarious nature and separated himself from the creature in The Amazing Spider-Man #258 (November 1984) - with a brief rejoining five months later in Web of Spider-Man #1. The symbiote went on to merge with other hosts, most notably Eddie Brock, its second and most infamous host, with whom it first became Venom. As one of Spider-Man's most enduring villains, Venom quickly established himself as one of his arch-enemies, with many regarding him as a dark reflection of Spider-Man. The character later became an anti-hero, working both with and against superheroes. Other notable hosts of the Venom symbiote include the villain Mac Gargan, formerly known as Scorpion, and Flash Thompson, who became the superhero Agent Venom.