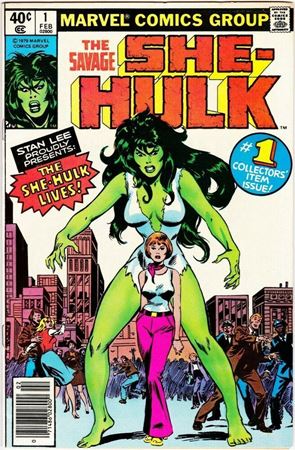 She-Hulk (Jennifer Susan Walters) is a fictional superhero appearing in American comic books published by Marvel Comics. Created by writer Stan Lee and artist John Buscema, she first appeared in The Savage She-Hulk #1 (cover-dated February 1980). Walters is a lawyer who, after an injury, received an emergency blood transfusion from her cousin, Bruce Banner, and acquired a milder version of his Hulk condition. As such, Walters becomes a large, powerful green-hued version of herself; however, unlike Banner, she still largely retains her personality: in particular, she retains the majority of her intelligence and emotional control, although like Hulk, she is still susceptible to outbursts of temper and becomes much stronger if enraged. In later issues of the comics, her transformation is permanent.

She-Hulk has been a member of the Avengers, the Fantastic Four, Heroes for Hire, the Defenders, Fantastic Force and S.H.I.E.L.D. As a highly skilled lawyer who became a superhero by accident, she frequently leverages her legal and personal experience to serve as legal counsel to various superheroes and other metahumans.

She-Hulk is scheduled to make her live-action debut in She-Hulk, an upcoming television series as part of the Marvel Cinematic Universe on Disney+, portrayed by Tatiana Maslany.